This blog campaigns for democracy in the City of London based on the principle of every adult resident having an equal say in who represents them on the local council. We believe not only that the undemocratic business vote system that is unique to this rotten borough must be abolished, but that it will be abolished in the near future. To facilitate this we’re shining a spotlight on the murky and anything but transparent machinations of this local authority. However this site began as a response to overdevelopment in the EC1 area – encompassing parts of both the City of London and the London Borough of Islington. Therefore we will explain its evolution as a way of assisting visitors understand what it is now.

In the Bunhill ward of Islington we were concerned about the proposed redevelopment of the Finsbury Leisure Centre. We were not opposed to the redevelopment but felt it needed to be redesigned so that the local community lost fewer sporting facilities and a proposed new block of flats didn’t overshadow a local park and social housing. An initial relatively sensible plan had been derailed when the owners of newly built luxury ghost homes in Dance Square caught the ear of the council. It seemed that the interests of the long established local and very diverse working class community counted for far less to Islington councillors like Claudia Webbe than the lobbying power of a few wealthy investors. At meetings and in the press Webbe gave the impression she knew little about the existing sporting facilities, since she claimed nothing was lost in the proposed new design. Actually a comparison of current provision and the new proposal revealed a massive reduction in what was on offer. Once the fact the local community knew this was flagged up to Islington council, they responded by saying they might add another exercise studio to the proposed new building.

Of even greater concern to us was the sale of the 110 social housing units in Bernard Morgan House by the City of London council, so that Taylor Wimpey could demolish the building and replace it with 99 luxury flats. These were aimed at ghost home investors who would neither live in them nor rent them out, but rather bet on reaping a profit from London’s overheated property market. This development will overshadow a park, social housing and schools, since it is much bigger than the building it is replacing. With an enormous amount of effort, community activists managed to get the national media to cover some of the more disturbing aspects of this story. For example, The Guardian reported on the contentious granting of planning permission for Taylor Wimpey’s The Denizen development on the site of Bernard Morgan House:

The story follows a by-now-familiar plot. In May 2017 planning approval was given to Taylor Wimpey, despite strong opposition from local residents and businesses. During this process it emerged that the chair of the City’s planning and transportation committee, Chris Hayward, is a director of Indigo Planning, whose clients include Taylor Wimpey. Deputy chair James Thomson was formerly deputy chief financial officer and chief operations officer of Cushman and Wakefield, commercial property and real estate consultants, which marketed and sold Bernard Morgan House to Taylor Wimpey. The committee member and former lord mayor of London Sir Michael Bear was appointed chair of the planning consultancy Turley Associates – which also acts for Taylor Wimpey – a few weeks after planning approval was granted.

Developers are using culture as a Trojan horse in their planning battles by Anna Minton, The Guardian, 10 October 2017.

City of London residents have found themselves consistently stonewalled by the council when they’ve raised potential conflict of interest issues on a variety of subjects. It became apparent that even when concerns were picked up by the national press that unlike Islington, the City of London was not going to listen to its residents – let alone act on what they had to say – because it wasn’t answerable to them. 80% of City of London councillors are elected on undemocratic business votes and this local authority clearly sees its purpose as being global lobbying on behalf of the finance industry and tax havens; it spends millions of pounds on this every year to further the interests of the super-rich and corporations. Not only is this lobbying activity detrimental to most City of London residents, it impacts negatively on billions of people around the world.

The City of London council doesn’t care about its residents – and has been particularly neglectful of those who live on the two council estates (social housing projects) within its boundaries – and never will until the business vote has been abolished. Business votes don’t exist in any other UK local authority area and they shouldn’t in the City of London. As campaigning on local issues is largely pointless for City of London residents because the council is utterly undemocratic, we’ve shifted the focus of this blog onto what’s wrong with our local authority. We’ve kept our earlier posts about overdevelopment as regards Taylor Wimpey’s The Denizen, but removed seven blogs about the proposed Finsbury Leisure Centre redevelopment. We still very much care about our friends across the border in Islington – and continue to participate in their campaigns – but our broader EC1 activism currently manifests itself elsewhere and not on Reclaim. This blog is now about everything that’s wrong with the unbelievably undemocratic City of London, because so much of this is directly connected to the business vote. Join us in saying: “No to business votes, yes to local democracy!” Please bring the issue up anywhere you can and especially with your local MP.

Final note (retained from an earlier version of this page): Incredibly as soon as Taylor Wimpey had put a wooden fence around Bernard Morgan House, they affixed signs to it on which they misspelled the word ‘acquired’ – one of these hoardings was erected right by the Golden Lane school crossing. Presumably Taylor Wimpey wanted to hammer home the lesson that ‘money doesn’t talk it swears’; it didn’t seem to occur to them that the local community might have something to say about corporate greed and disregard of local needs. It’s time to reclaim EC1 from overdevelopment by shining a spotlight on the machinations of the likes of Taylor Wimpey and their cronies. 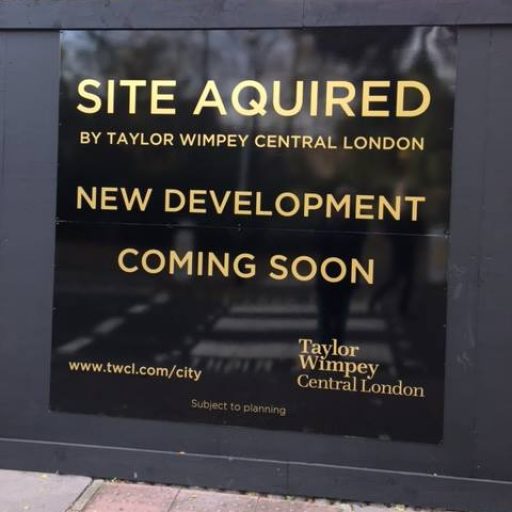