The City of London claims it is reviewing its gender identity policies and wants to stamp out discrimination against trans people. This follows hot on the heels of last weekend’s debacle of the first Pride march the City supported being hijacked by anti-trans protesters.

Yesterday the City’s Establishment Committee issued a document entitled Over-arching policy on gender identity for the City of London Corporation (issued 9 July 2018). The committee is currently chaired by Edward Lord who we’ve previously criticised for defending the men only policies of the masonic lodges that use City of London premises, often for free or at reduced rates. Given the influence of masonry within the City – since 1905 more than 50 percent of its Lord Mayors have belonged to the Guildhall Lodge – this is a significant equality issue. The City has introduced gender-neutral toilets in the Barbican, so why is it so reluctant to insist masonic lodges should recruit women members? The various Livery Lodges, Farringdon Without Lodge No. 1745, City of London Lodge of Installed Masters No. 8220, Londinium Lodge 4208 and Guildhall Lodge 3116, should all be banned from operating within the council’s boundaries unless they actively recruit women members. 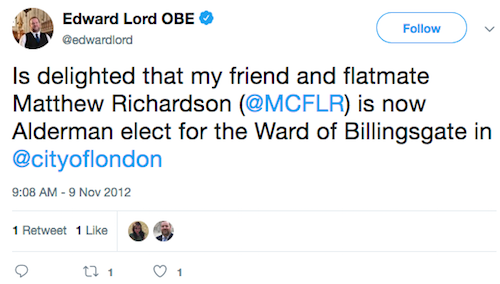 Aside from his refusal to tackle the exclusion of women from all male institutions such as the Guildhall Lodge, Edward Lord – who plays a lead role in the council’s diversity ‘initiatives’ – shared a flat with his fellow freemason and City of London councillor Matthew Richardson around the time the latter made a transphobic speech in the USA:

He blamed “socialists” who he said supported people whose gender needed to be reassigned.

“Socialists think that if somebody wants to reassign their gender the state should pay, they think that’s how the world works,” he told an audience of several right-wing groups in the United States.

The recordings originate from a speech made in 2010 to the Young America’s Foundation Conservative Student Conference in Washington DC, and came to light after they were obtained by the Sunday Mirror newspaper.

Mr Richardson is the party’s secretary and a member of its executive council, and is a close ally of Nigel Farage.

If the City of London wants to be taken seriously on diversity issues it not only needs to tackle the sexist and patriarchal nature of the masonic lodges it hosts in its buildings (and subsidises with free and reduced hire rates), it should simultaneously address the recent staging of far-Right Italian politician Armando Siri’s speech at its Guildhall offices. It would also be well advised to distance itself from some of the public utterances of its councillors, such as the tweets we recently flagged up by Mark Wheatley. This local authority was probably fortunate that media coverage of Matthew Richardson sometimes focused on his role as a top UKIP official rather than a City councillor, but nonetheless it might like to clarify its positions on some of his public statements too.

City of London councillor Matthew Richardson (the alderman is at the back wearing spectacles) and his close ally UKIP leader Nigel Farage (front) were the first British politicians to meet Donald Trump after his election to the White House. Here they are getting out of a lift on their way to see this hard right leader.

The City of London Corporation is to launch a new consultation on its gender identity policies by Anonymous, 9 July 2018: https://news.cityoflondon.gov.uk/city-of-london-corporation-to-launch-a-new-consultation-on-its-gender-identity-policies/

Pride in London failed to remove anti-trans group who pushed their way to front by Patrick Greenfield, The Guardian, 8 July 2018: https://www.theguardian.com/world/2018/jul/08/london-pride-organisers-say-sorry-after-anti-trans-group-leads-march

The City of London will take part in London Pride parade for first time ever by Anonymous, Attitude, 5 July 2018: https://attitude.co.uk/article/the-city-of-london-will-take-part-in-london-pride-parade-for-first-time-ever/18422/

For Matthew Richardson’s involvement in freemasonry see his register of interests as a City of London councillor which lists it: http://democracy.cityoflondon.gov.uk/mgDeclarationSubmission.aspx?UID=374&HID=2896&FID=0&HPID=506098408

Edward Lord’s involvement in freemasonry is listed on his register of interests as a City of London councillor. It is also covered in his Wikipedia entry as it currently stands and in various places on this blog. An earlier example of the latter can be found here.

On the extraordinary number of City of London Lord Mayors who have been members of the Guildhall Lodge, we first mentioned this in a post about former Lord Mayor Michael Bear’s declaration of interests; we took the information from the London Metropolitan Archives and have subsequently found other sources for it. See, for example, this post about Edward Lord.

6 thoughts on “Matthew Richardson, Diversity, Gender Identity & Freemasonry in the City of London”