If the Culture Mile is supposed to attract international visitors to the City of London as a beacon of the arts, it’s clearly stupid to use imperial rather than metric measurements for this branded name. While one can see that the bureaucrats who chose this designation were trying to invoke the area’s half-forgotten nickname of The Square Mile, such fusty terminology won’t help them ‘half-inch’ renown as a major European cultural destination from elsewhere. Imperial measurements aren’t a part of forward-looking international arts zones, metric ones are!

As a way of trying to get their arts folly rolling, the City of London has announced a Culture Mile design competition called Summer Speculations: “Can you identify spaces and/or opportunities within the Culture Mile where we can bring ‘the inside outside’?” Reclaim EC1 made a number of suggestions for the Culture Mile in a previous post, but here’s another bright idea: given that the City of London is run on a uniquely undemocratic basis that differs from the political system of all other local authorities in the UK, we should install stocks on the Barbican podium and put the aldermen and those common councillors elected on business votes in them – so that they can be pelted with soft fruit. While the City is ‘turning the inside out’, and bringing tourists in from outside, we might as well have the final inversion of turning the world upside down!

Catherine McGuinness who fronts the Culture Mile project for the City of London.

If the City of London really wants its north-west corner to become a ‘cultural hub’ then it needs to modernise itself; unaccountable political and financial institutions and a thriving arts scene do not go together. Politically the City remains feudal and resolutely undemocratic. One of the four pillars of the City’s Culture Mile plan is to ‘celebrate history and community’, and there is no better way to do this than give its residents a genuine say in how the place is run! They certainly don’t have this at the moment with business voters from outside the area having an overwhelming influence on the make up of the local council. Establishing democracy in the City would be historic and actually do something positive for the community who live inside its boundaries! The first step towards a genuine local democracy is abolishing the business vote.

Like many residents of Barcelona and elsewhere, local people may well think that more tourism is not necessarily a good thing for their area; and that the City should be trying to reduce rather than increase the number of leisure visitors. Likewise many experience the ‘pop up consultations’ for the Culture Mile project as insulting. Those conducting them appear to know very little about the arts and wrongly assume the residents they’re talking to know even less. As usual with the City of London council, the point of the ‘consultations’ appears to be the rubber-stamping of decisions they’ve already made. If the Corporation actually wanted to hear local opinion holding pseudo-consultations outdoors is not the best way to achieve this, but then the City probably believes this is the most efficient way to secure a stitch-up.

Unity Is Length! Smash the Culture Mile! Give a City banker or lawyer a centimetre and they’ll want an inch! The City’s Cultural Mile actually falls short of its implied length and is closer to a kilometre! But the Corporation is still trying to sell this part of England by the pound and not the kilogram! Are City of London councillors on the square? You be the judge! We’ll be the jury! Together we can bring those holding out against democracy to account!

The final two Culture Mile pop up ‘consultations’ for now are: 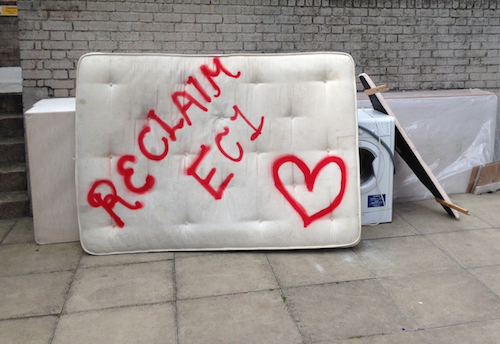 This is the kind of pop up art installation we’d like to see in the Culture Mile, but no doubt we’ll get the usual middle-brow corporate junk instead of some worthwhile democratic agit-prop. Given the ongoing association of the financial district to the immediate south and east of the Culture Mile with junk bonds and sub-prime mortgages, it is only logical that those in charge of both that and the more residential area they want to transform into an international arts destination, should have sub-prime tastes.

6 thoughts on “The Culture Mile is a branding disaster, give us a democratic kilometre!”

I'm inspired by sisterhood, Occupy London, home made clothes, valve amps, short books and long hair. I think big, work hard and value love. In my spare time I do origami and I've been learning Bulgarian for the last year.
Tax Justice Network